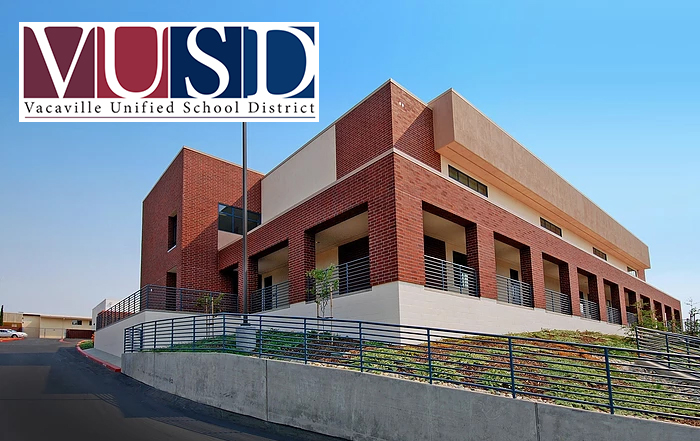 About the School District

The Vacaville Unified School District in Northern California serves 12,500 students at 18 schools in a bedroom community outside of San Francisco. Its mission is to provide academic excellence and choices to students that encourage individualized learning experiences.

Vacaville partnered with CDI Computer Dealers in 2014 for a small Chromebook implementation and expanded the partnership in 2015, purchasing 13,000 Chromebooks for a district-wide 1:1 initiative.

Technology Coordinator Jim Wasielewski said the district has been extremely pleased with the quality of CDI’s products, as well as the warranty and the prices CDI offers. The district also took advantage of CDI’s School Branding service to imprint the Chromebooks with the schools’ logos.

In 2014, California was part of the Smarter Balanced Assessment Coalition (SBAC), which created new Common Core state standards in math and English Language Arts. School districts throughout the state were under pressure to update their technology so students could complete the SBAC assessments (now called the California Assessment of Student Performance and Progress or CAASPP) online. Vacaville needed to find reliable technology to facilitate this online testing that would be easy for students and teachers to use, and would also be simple for the district to manage.

The district also faced an internal challenge of technology equity among its schools. Some schools had strong fundraising partners and were therefore able to afford the latest technology. Others lagged behind. Vacaville wanted to give all of its schools access to the same level of high-quality technology.

“Technology always seemed like the icing on the cake rather than something that was automatically provided to every school.”
– Jim Wasielewski, Technology Coordinator

In 2014 Vacaville School District voters approved a $180-million bond issue to renovate the district’s buildings and update its technology. This was the perfect opportunity for the district to implement a 1:1 initiative that would allow it to assess students online. Vacaville tested iPads and Chromebooks and ultimately selected Chromebooks as its student devices, and CDI as its partner.

“We were pleased with the solution we purchased from CDI,” he said. “The Chromebooks just worked,” said Wasielewski. “They are easy to manage, effective with curriculum and instruction and a great testing device. There is also an incredible amount of power in the kinds of curriculum offered for Chromebooks.”

The bond issue also allowed the district to ensure a minimum standard of technology for every school and to create a dedicated budget for technology refreshes. “The big thing in our district before the bond issue was quality of access to technology,” said Wasielewski. “Technology always seemed like the icing on the cake rather than something that was automatically provided to every school.”

District now has around 13,000 Chromebooks. It added CDI’s School Branding services to personalize the Chromebooks with each school’s logo. “It’s a nice touch and helps us keep track of the devices,” said Wasielewski. “The students also tend to take better care of them.”

Each student receives a Chromebook at the start of each class period to use during that class. The devices do not go home with the students, nor do students carry them from class to class. Teachers have desktop computers or laptops. Wasielewski has been impressed at the impact of the Chromebook initiative. It has not only been a great solution for online testing, it has completely changed teaching and learning at Vacaville USD.

“Any time I walk around campus 90 percent of the time the Chromebooks are open and kids are doing things on them,” said Wasielewski. “It has completely changed the way curriculum is being delivered. So it’s not just going to a lab once a week or having a cart to use once or twice a week. Students have a device available every day.”

Vacaville’s initiative has allowed teachers to take advantage of new types of curricula geared toward 1:1 classrooms. By providing a dedicated device for students to use every day, it has helped students feel comfortable creating and submitting projects online and using technology in and out of class, Wasielewski said. For example, students learn how to create and edit slide presentations including adding music. This is fun for the students and helps them learn the material, Wasielewski said.

The initiative also created an opportunity for Vacaville to help the community. As it replaced the older computers in the classrooms, it donated them to needy families. Over the course of five years, the district has donated 450 Dell computers to families throughout the community and Comcast provides affordable internet access to those families. “The idea was to have some kind of access for everyone,” said Wasielewski. “If someone said they needed a computer, we gave it to them.”

“I look at where we were as a district 5, 10, 15 years ago and it’s pretty amazing to see how quickly things have changed. In the grand scheme of things not a whole lot of money can make a huge difference when it comes to the way everyone works – the teachers, students, staff – in the classroom and beyond.”
– Jim Wasielewski, Technology Coordinator

In the next few years, Vacaville will continue its Chromebook initiative with the help of CDI, Wasielewski said. The bond issue and the partnership with CDI has helped Vacaville create an effective, sustainable 1:1 program that ensures technology equity for schools, meets the district’s goals for online testing, and opens up new opportunities for teaching and learning, both today and in the years to come.